In the first week of September 2015, Greg Pavone and I unearthed Miner’s Hill cave in Manchester New York.  This cave may have originally been dug by Joseph Smith Jr., founder of Mormonism in the 1820s, and may have been one of the locations of the Book of Mormon’s translation and/or manuscript preparation.  We exposed the cave entrance and dug down the cave floor to its original level, but further excavation, research, and restorative work still needs to be done.  Please direct all inquiries to mormoncave@gmail.com. 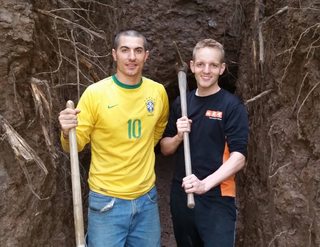 In June of 2014, Greg Pavone and I decided to go on a Mormon history road trip through the northeastern states.  We had been housemates in Cambridge, MA as we both finished our final year in our respective graduate school programs. On this trip, we not only visited the points of interests designed to accommodate tourists, but we also sought out “off-road” and local experiences, such as locating Hyrum Smith and Oliver Cowdery’s birthplaces, both of which require exploration through deep Vermont forests and dirt roads to locate.  While in Palmyra, NY, we stumbled into an older local non-Mormon man who asked us if we had ever heard of the “lost Mormon cave.”  It was news to us.  He went on to explain that as a younger man sometime in the early 1960s, he visited and entered a nearby cave that was discovered by some local kids.  Word had it that Joseph Smith himself had dug the cave.  He told of how the past property owner had cleared the cave and tried to turn it into a commercial attraction, but now the cave had all but disappeared into the brush of the hill.  We felt impelled to follow up on this story.  Over the next year, we looked up every historical source to ever mention the cave and determined the cave’s likely geographic location.  We contacted the current property owners and secured permission to engage in excavation activities. We rented a Kubota KX191 Mini-Excavator, and in the first week of September, 2015, after months of planning, we had boots on the ground and began the field work.

The historical sources that refer to the cave directly are in some respects rather muddled and inconsistent.  Yet, the volume of sources and general common themes found throughout them demand some consideration.  The overall consensus seems to be that Joseph Smith and/or his family (notably his father Joseph Smith Sr., and possibly older brother Alvin) manually dug the cave into the hill in the early- to mid-1820s and installed a door and lock on the entrance.  Joseph then used it for any number of purposes, ranging from the neighborhood pastime of treasure digging, to food and equipment storage, to spiritual and prophetic endeavors.  A sampling of excerpts from a few early sources describing Joseph’s involvement with the cave is presented below:

An exhaustive collection of sources relating to the cave with some commentary is available here. Much credit is due to Dan Vogel and Dale R. Broadhurst for doing the heavy lifting with the primary sources. 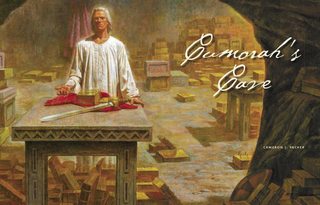 In addition to this cave being of historical importance due to its relation to early the life of Joseph Smith, there are a number of reasons that it holds potential interest from a religious perspective. In the mid- to late-1800s, LDS Church leader statements about a cave within the Hill Cumorah indicated that much of the Restoration’s unfinished business would involve records and other objects concealed within a cave. These teachings are cataloged in Cameron Packer’s 2004 JBMS article entitled “Cumorah’s Cave.”

Many of these statements relate to the age-old question of whatever happened to the gold plates. Joseph Smith[9] and Lucy Mack Smith[10] agree that the messenger (angel Moroni) called for the plates and received them from Joseph. What Moroni did with the plates is unstated, although it is sometimes assumed that the plates were taken up to heaven. David Whitmer offers information about what Moroni did with the plates after receiving them. When interviewed by the Deseret News in 1878, the reporter asked him point blank:

Reporter: Where are the plates now?
Whitmer: In a cave, where the angel has hidden them up till the time arrives when the plates, which are sealed, shall be translated. God will yet raise up a mighty one, who shall do his work till it is finished and Jesus comes again.
Reporter: Where is that cave?
Whitmer: In the State of New York.
Reporter: In the Hill of Comorah? [sic]
Whitmer: No, but not far away from that place. [11]

Whitmer seems to indicate that the sealed portion of the Book of Mormon was hidden up (much in line with 2 Nephi 27:22) in cave near Cumorah, but NOT Cumorah itself. 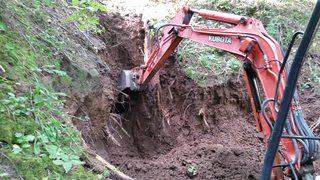 On the east side of Miner’s Hill, near the top, we found a large depression in the slope in front of a landing located at the top of a small access trail.  A walnut tree of considerable size was growing out of the dirt in the depression.  The first item of business was cutting down the tree and removing the stump with our rented excavator.  With the stump gone, we continued digging into the hill. With the help of a neighbor’s metal detector, we recovered door hinges, a chain, and a padlock early in the digging.  Plastic lining started to turn up in the earth as well.  All these artifacts would have been part of the external structure that Andrew Kommer would have built around the cave in the 1970s.

The digging continued, now moving higher up the slope.  Soon the excavator shovel reached a consistency of dirt that was markedly different.  We had cut through topsoil and had hit packed clay.  In a moment of rest, a large chunk of dirt near the top of the dig site collapsed inward, leaving a hole.  The neighbor who had brought the metal detector climbed up, put his arm in the hole, and noted a void in the earth.  After a little manual clearing he looked in and saw the main arch of the cave, its ceiling, and walls.  Most of the cave was filled with dirt that had collapsed in from the front.  The cave interior was like half an igloo.  The back wall was curved like the side walls and ceiling arch.

After some enthusiastic celebration at having made this breakthrough, the remaining task was to dig the fallen earth out in order to restore the cave floor to its original level.  This proved to be particularly challenging because we did not want to risk destroying the cave ceiling by bringing the excavator arm and bucket into the cave interior.  We continued to use the excavator to clear the earth leading up to the covered area, but all of the dirt inside the cave itself had to be cleared out by hand.

We spent many hours with a pickaxe, a shovel, and a wheelbarrow incrementally shaving down the ground level of the cave, leaving a cross section of the fallen earth on the sides for reference.  After several days of digging, we finally reached some wood planks directly under the cave ceiling. The planks contained round nails and appeared to be milled lumber, indicating that they probably dated to the 1970s as well.  At this point, we could stand up in and even walk around inside the cave.

We photographed and measured the cave as we had thus far dug it out.  There may be other secrets waiting to be discovered under the cave floor or in the surrounding earth.

Having successfully located the cave and cleared its entrance, the question of “what’s next?” become more pertinent. We did notify representatives of the LDS Church’s history department. They were interested and excited about our findings, but they have established a high standard of evidence that a site must meet before they invest in its exploration or preservation. Given that most of the information about Miner’s Hill comes from either decades-too-late newspapers or other less-than-credible second- and third-hand accounts, and that the sources largely disagree on the function or purpose of the cave, the Church has determined that the cave holds no relation or relevance to the Restoration, and that the cave was—if anything—simply the setting of a treasure dig. 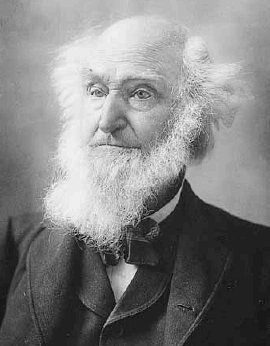 Most of the Book of Mormon was translated in Pennsylvania, discrediting Gilbert’s statements. But the late phase of translation did take place in New York (albeit Fayette, not Manchester). If further evidence can be found that supports Gilbert’s view that any of the Book of Mormon’s translation (or even the copying of the Printer’s Manuscript in 1829, the eight witnesses’ experience, or the receipt of D&C Sections 19, 22 or 23) occurred in this cave, the historical value of the cave would certainly increase.

Until then, however, erosion will continue to wear on the hill, vandals may have their way with it, and the possibility of unfound artifacts under the cave floor will remain unexplored. Consequently, please consider this a call to:

Please direct all inquiries to mormoncave@gmail.com.